Sharing Faith where Faith is Suspect 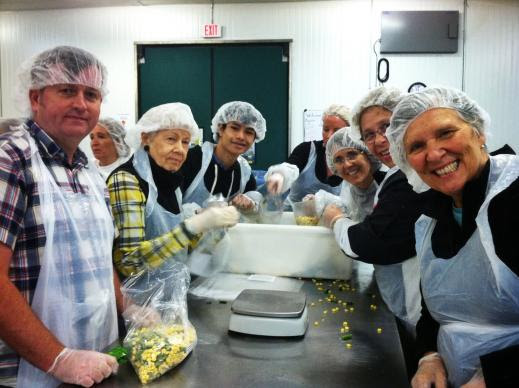 
With a strong belief in social outreach, members of First United Methodist Church in Portland volunteer at the Oregon Food Bank in Beaverton, Ore.
By Heather HahnOct. 21, 2015 | PORTLAND, Ore. (UMNS)
First United Methodist Church in Portland had a problem, one other churches would envy.
So many families with children were regularly attending that the Rev. Donna M.L. Pritchard began one sermon shortly after Easter with an urgent request for more volunteers to teach Sunday school.
“We have so many kids now we are going to have to split our Sunday school classes,” the church’s senior pastor said after a children’s sermon that packed the front of the church with little ones. The church’s rooms, she added, aren’t big enough for more than 20 youngsters in a single class.
The church, the largest United Methodist congregation in Oregon with about 800 members, is defying its community’s religious trends.
Over the past three years, the church has welcomed an average of 30 new members a year and seen its average worship attendance grow from about 330 to 375. This summer, the church added a second service on Sunday mornings to accommodate its growth and make room for more.
The 167-year-old congregation has succeeded in the U.S. major metro area that a 2015 survey by the Public Religion Research Institute found has the highest percentage of residents with no religious affiliation — some 42 percent of the population. Put another way, Portland is at the leading edge of the “None Zone” — where more people answer “none” when asked their religion than identify with any single faith group.
Read the full story!
Labels: mission