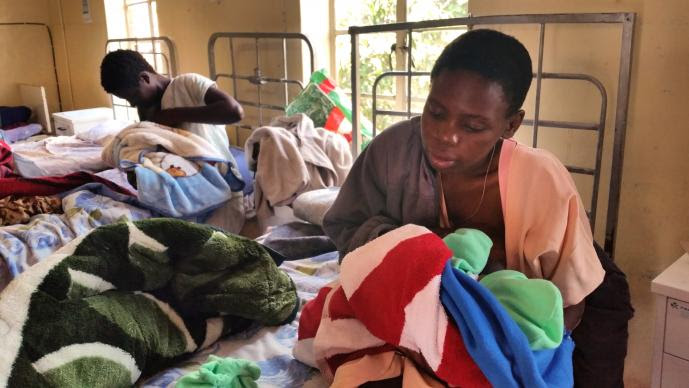 
Mary Chimunda sits perched on the narrow hospital bed, her newborn baby clutched to her chest.  The 20-year-old beams as she looks down at her son, and lovingly rearranges the blanket swaddling him.
On either side of her are two new mothers, also caring for their infants.  The ward’s silence is broken by the voice of the acting matron, Susan Mtokoma, jokingly asking the mothers if they intend to sell their breast milk.  “No!” they reply in unison and immediately position their babies to suckle.
Mutambara Mission Hospital is a baby-friendly hospital and advocates exclusive breastfeeding of babies from within one hour after birth to six months. “Babies may be given other foods after six months, but we encourage mothers to continue breastfeeding for up to two years,” said Mtokoma.
The United Methodist hospital won the Baby Friendly Initiative Award for 2015 and its baby-friendly policy is now being used as a role model for the whole country, said Mtokoma.
Chimunda is overjoyed by the safe delivery of her son.
“I came to the hospital more than a week before my baby was born.  I was resident at the mothers’ shelter while awaiting delivery because my home is more than 20 kilometers away and there is no reliable public transport due to the rough terrain,” she said.
She sadly recalled the loss of her first child on Jan. 24, 2013:
“I came to the hospital when I had been in labor for two days.  The baby died within 24 hours and I was told that he was exhausted due to the prolonged labor.  This time I did not want to risk losing my baby so I came and stayed at the shelter where I was closely monitored by specialist staff.”
Read the full story.
Labels: mission