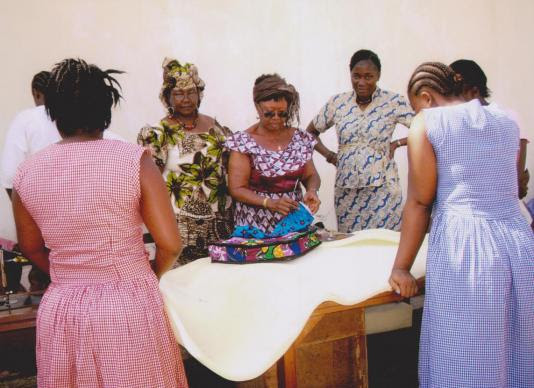 By Phileas JusuJan. 20, 2016 | FREETOWN, Sierra Leone
Note: In the article below, the former prisoners’ first names have been changed and last names omitted.
Prisoners in Sierra Leone have received Christ, been baptized and even been released thanks to a thriving United Methodist prison ministry.
“I committed murder,” said 41-year-old Janet, who served time in a prison in the city of Moyamba, and later at the Freetown Female Correctional Center. “My rival used to taunt me that I was barren. She used to call me names. … In the society where we live, barrenness is viewed as a curse or a terrible disease, and I was laughed at each day. I used to weep day in and day out, and many times I thought of committing suicide. I could bear the torment no longer and took the opportunity to revenge one day. I asked my rival’s son to accompany me to the farm where I killed him.”
Janet sees the prison ministry as God’s grace. “I was touched with what the United Methodist pastors told us about the love of God – that Jesus did not come to call the righteous but sinners to repentance; that Jesus died for our sins including my own sin!” she said. “That gave me hope. I started looking forward to the weekly visits from the Rev. Daisy Gbloh and Mama Edith Rogers. They counseled me as I poured out my heart to them.
“My life changed. I decided to give my life to Jesus, whether I was released from prison or not. I started telling others, especially the new inmates, about the love of God.”
Read the full story.
Labels: mission