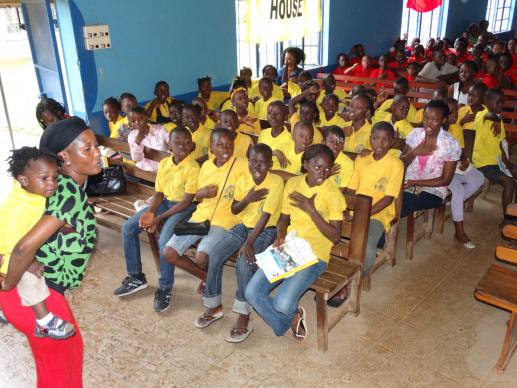 
The Sierra Leone Conference has wrapped up its first post-Ebola children’s camp at Harford School for Girls here. The program ended with a thanksgiving service at the city’s Trinity United Methodist Church.
The one-week camp of mainly United Methodist children was suspended in 2014 and 2015 amid the world’s worst Ebola outbreak in West Africa, which caused more than 11,000 deaths worldwide, the majority of them in Sierra Leone, Liberia and Guinea, according to the World Health Organization.
Olivia Fonnie, director of Christian Education and Specialized Ministry to Children for the conference, said about 210 children attended Camp 2016 held July 25-31, the highest camp enrollment she has seen as director.
“The children are excited after having missed out on camping (the two previous years),” she said.
“One of our responsibilities in the church is nurturing the children for Christian life, and we believe that bringing the children together for a week and teaching them the word of God and Christian ways, creating the opportunity for them to meet new friends and learning from one another will shape their lives for the future.
“We also believe that children coming from the cities and meeting others from remote rural communities, who struggle with very few opportunities, will (help them) learn to appreciate what God has given them,” Fonnie said.
The rest of the story, written by Phileas who spoke at Christ Church earlier this year.
Labels: mission