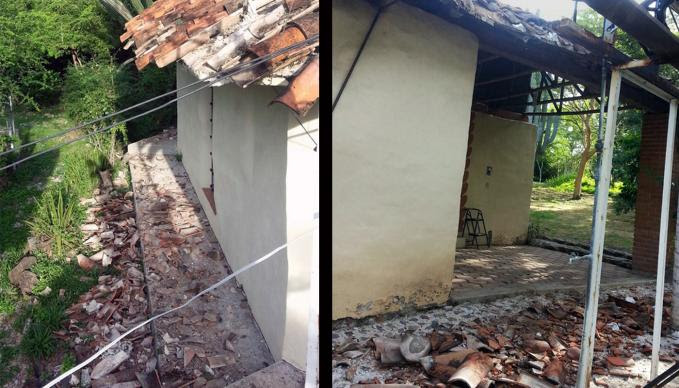 Photo courtesy Muriel Henderson
The Sept. 19 earthquake in Mexico damaged tile roofs and plaster walls at the Tree of Life Center, in the village of Tlancualpican. The center is part of the United Methodist-supported Give Ye Them to Eat ministry.
By Sam Hodges
Sept. 21, 2017 | UMNS


Methodists are among those affected by and responding to the earthquake that struck south central Mexico on Sept. 19, killing at least 245 people.
The Rev. Raquel Balbuena, a superintendent in the Methodist Church of Mexico’s Southeast Annual Conference, said she has had reports from pastors of deaths among Methodist church families in the state of Morelos, near the earthquake’s epicenter.
Some church buildings of the Methodist Church of Mexico were damaged, as were some parsonages and homes of church members and ministry staff.
The Give Ye Them to Eat ministry, founded by longtime United Methodist Board of Global Ministries missionaries Terry and Muriel Henderson, saw damage to its Tree of Life Training Center in the village of Tlancualpican, in Mexico’s state of Puebla.
The rest of the story of Methodists and this earthquake in southern Mexico. NOTE: A friend of mine, Rev. Marian Hartman, the DS of the Scranton/Wilkes-Barre District, has pioneered the connection between the Susquehanna Conference and Give Ye Them to Eat.
Posted by JP Bohanan at 9:04 AM No comments:

Posted by JP Bohanan at 8:12 AM No comments:

Ro 5.1-11
Justification of the ungodly
Boasting in our suffering

“in the truth; your word”
John’s gospel: “in the beginning was the Word” (1.1)
“I am the way, and the truth, and the life” (14.6)
On the personal side,
this word is the gospel word of pardon (justify)
“faithful and just to forgive us” (1Jn 1.9)
not about us being “right” because we know THE truth
about us being righteous (justify) and holy (sanctify)
On the global side,
this word is the gospel word to which we are consecrated –
as what Paul calls “ministers of reconciliation” (2Co 5)
as Jesus declares here,
“exactly as you have sent me into the world, so I have sent them into the world” (Bruner trans 17.18, 1003)
Sanctified not for our own sake but for the world

Disaster Response: "When the Storms of Life are Raging"

Dear Sisters and Brothers in Christ,

Grace to you in the name of Jesus Christ, Prince of Peace, Healer of our Brokenness and Hope of the World!

The great Afro-American Methodist pastor and gospel hymn writer, Charles Albert Tindley was revered for his preaching and musical gifts. Recently, because of the extent of the natural disasters experienced in Mexico, the Caribbean, the United States, and throughout the world, I have found myself thinking of his hymn, "Stand by Me." The words of the first and second stanza read:

Rev. Dr. Tindley's hymn is uplifting the desperate necessity of the presence of God in the storms of life. Too many people in too many places, have experienced overwhelming destruction from the recent natural disasters. Homes have been destroyed, property has been ruined, and most tragically a number of people have perished in these monstrous storms and earthquakes. Our hearts and prayers go to those who are directly affected by the catastrophes, their families, and communities.

Be Unto Your Name

Posted by JP Bohanan at 9:21 AM No comments:

Posted by JP Bohanan at 9:46 AM No comments:

Posted by JP Bohanan at 9:08 AM No comments: 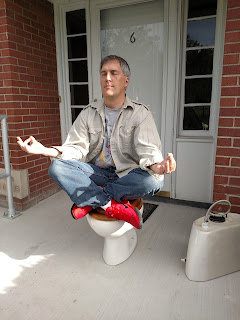 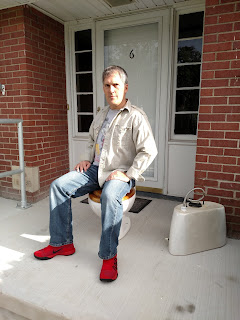 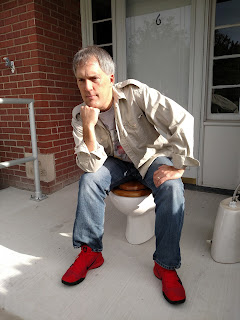 Childhood friendship – refusing to share friendship
Define ourselves by the group we are in
Define our groups by their borders, not their center 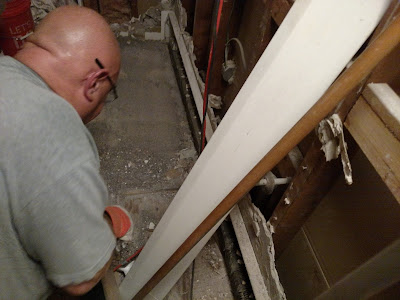 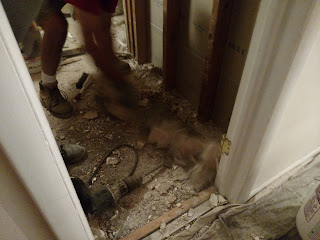 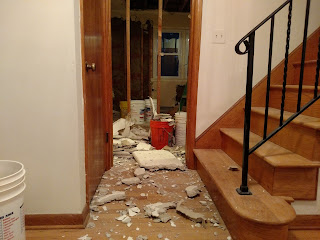 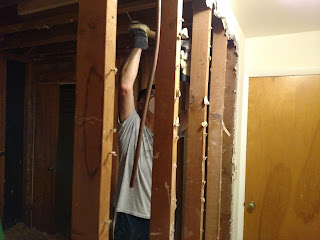 More from the demolition work. The full photo album of the project, from discovery of the water problem forward.

Email ThisBlogThis!Share to TwitterShare to FacebookShare to Pinterest
Labels: property


One of the groups that meets in our space, the Women's Club of Mountain Top, is partnering with Manna House to make a difference in our community!
Posted by JP Bohanan at 3:40 PM No comments:

Back to School Hospitality 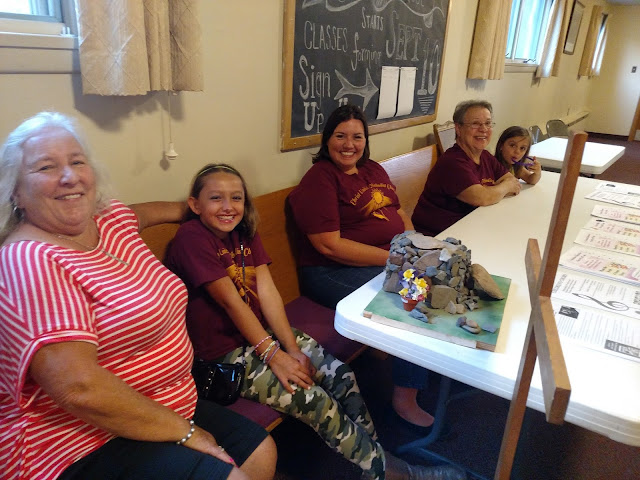 Part of the hospitality team on back-to-school night for the Ark.
Posted by JP Bohanan at 3:30 PM No comments: 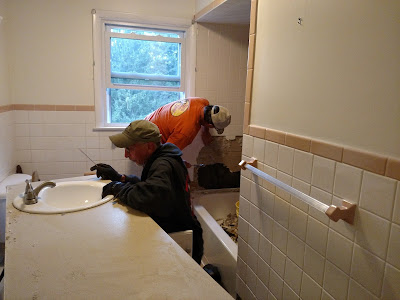 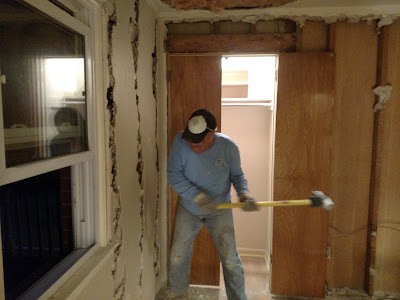 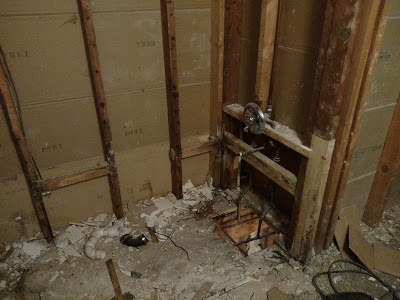 Thanks to the teams of folks who have come out to tear out the upstairs bathroom, getting it ready for renovation after water damage, and to rip out a downstairs bedroom (and eventually the bathroom too) to make the space wheelchair accessible. There's still room for help in demolition and painting. 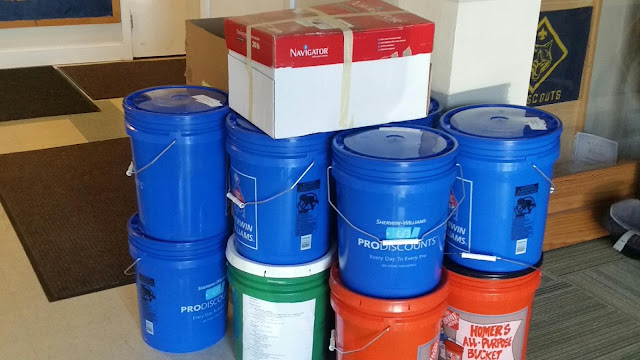 Collecting cleaning kits and kit ingredients now through Nov 19. These completed kits will hit the road on Sept 24. Thanks to everyone for these concrete expressions of love and compassion. Click for the complete kit directions and other hurricane responses. 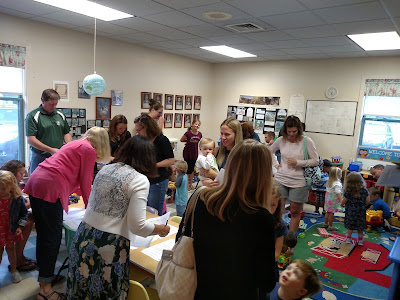 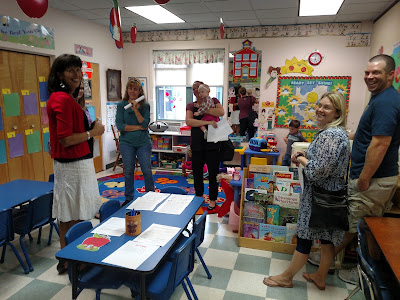 Lots of fun at the back-to-school meet-the-teachers night at Christ Church!
Posted by JP Bohanan at 3:29 PM No comments:

Exodus and the Sacraments: Font (2)

Sorry, no video for this week.

Intro to this series of messages:
4 passages in Exodus that are the basis for extensive NT reflection on the sacraments – Table, Font, Table, Font
2 are part of the exodus proper (deliverance from Egypt)
2 are part of the wilderness experience
Admittedly, we will be reading these Exodus passages through the lens of the NT, not the way our Jewish friends read these passages.

Conflict?
This is “Font 2”
Paul puts this as part of the Lord’s Table
1 Corinthians 10:1-4  I do not want you to be unaware, brothers and sisters, that our ancestors were all under the cloud, and all passed through the sea,  2 and all were baptized into Moses in the cloud and in the sea,  3 and all ate the same spiritual food,  4 and all drank the same spiritual drink. For they drank from the spiritual rock that followed them, and the rock was Christ.
Rabbinic tradition: Miriam – a mobile well that followed Israel
Water (of life) from a woman
Birth? Water breaking? John 3, “born of water & Spirit”

However, clearly read by Paul in sacramental way
Focus today is not on what we learn about baptism from this passage, but how we live a sacramental life

Israel doesn’t look very good here
But neither do the Corinthians, and often neither do we
1 Corinthians 10:12  So if you think you are standing, watch out that you do not fall.
Read more »
Posted by JP Bohanan at 8:41 AM No comments:

Email ThisBlogThis!Share to TwitterShare to FacebookShare to Pinterest
Labels: message

ALL CARLISLE GATHERING PHOTOS TAKEN BY CHARLES FOX / PHILLY.COM PHOTOGRAPHER
At the U.S. Army War College in Carlisle, Pa., hidden behind the tall chain-link fences draped with black cloth and the signs that read, “Cemetery closed, please respect Native American privacy,” history was being made over the past week, and long-deferred dreams were coming true.
Two leaders ­of the Eastern PA Conference Committee on Native American Ministries (CoNAM) were involved in unprecedented Army efforts to dig up and repatriate buried remains of renamed Native children who died there over 130 years ago as students of the infamous, former Carlisle Indian Industrial School.
The burial there of Little Plume (aka Hayes Vanderbilt Friday), Little Chief (aka Dickens Nor), and Horse (aka Horace Washington), among nearly 200 others, is part of a dark, painful ongoing legacy of abduction, forced assimilation and reported abuse of more than 10,000 Native children and youth from nearly 50 tribes. Many of them were taken from their homes and brought to the former school from its opening in 1879 until its closing in 1918.
The rest of the story ... which includes refers to work by our own Susquehanna Conference as well.

Posted by JP Bohanan at 5:25 PM No comments: 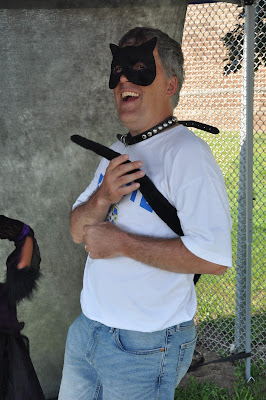 From the Lighthouse carnival and back to school event.
Posted by JP Bohanan at 3:28 PM No comments: 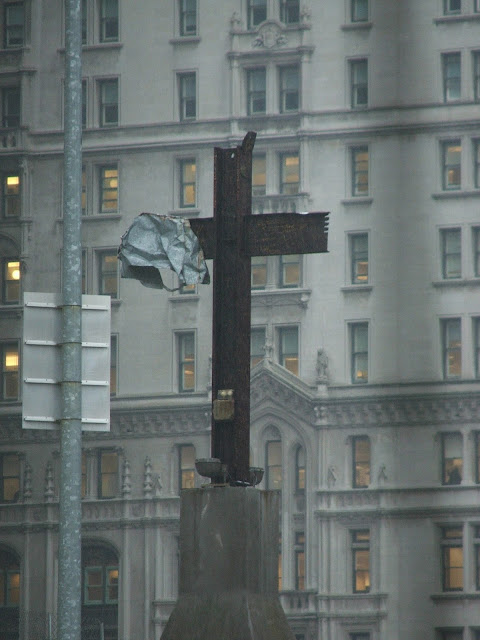 Posted by JP Bohanan at 4:39 AM No comments:

Email ThisBlogThis!Share to TwitterShare to FacebookShare to Pinterest
Labels: reflections 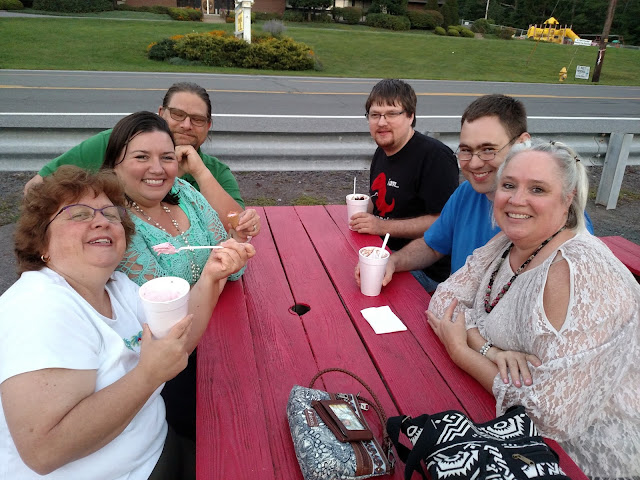 One of the last days possible at Mountain Freeze. Getting a special snack after the 6:00 pm Open Table contemporary service.
Posted by JP Bohanan at 3:26 PM No comments:


The Confirmation class will be at St. George's for this event on October 14. Contact Kim Hirt to sign up!
Posted by JP Bohanan at 10:31 AM No comments:

Bessie “Doll” Dodd was released from prison on June 27, 2016.
While she said she was “glad to get out of there” after 35 years of confinement, she added it was “the hardest thing to walk out of those gates and leave my church behind.”
The church Dodd is referring to is Grace Place United Methodist Church, one of two United Methodist Churches located inside U.S. prisons.

... Grace Place is pastored by Rev. Diane Harrison, who started the congregation in the face of many obstacles and setbacks, but has persevered and followed her congregation to its new location.
Dodd told the celebration crowd how "Pastor Diane" came into her life and “turned it upside down” by bringing her to Jesus Christ.
Even though she was physically in prison, Dodd said Grace Place and her new-found faith provided her another kind of “freedom” inside the walls of her prison home.
Dodd was baptized by Memphis Conference Bishop Bill McAlilly when he visited the prison in February, 2013. Click here to read story about McAlilly's visit.
Dodd said Grace Place became a place for her and other imprisoned women to go for worship, Bible study, exercise, craft classes and more. She called it her “home” and said, while choking with emotion, it “transformed” her life.

The rest of the story...

Posted by JP Bohanan at 3:34 PM No comments: 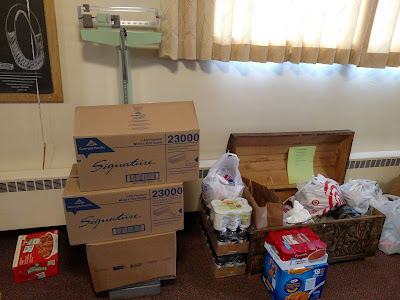 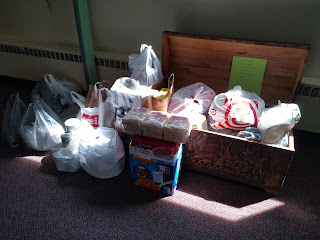 The treasure chest filling up and overflowing. So far, 620 pounds of food and $280 given to our food pantry partner!
Posted by JP Bohanan at 3:24 PM No comments: 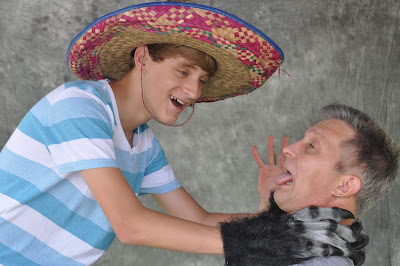 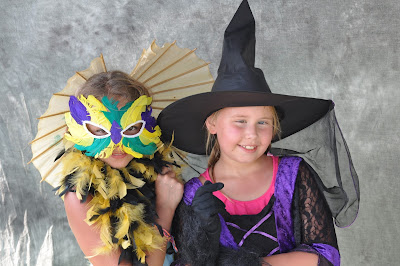 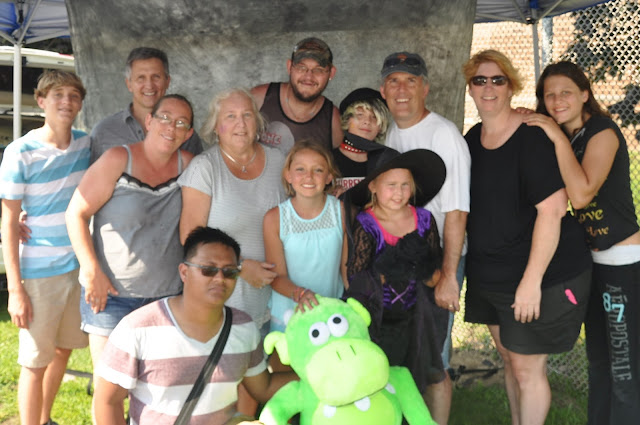 From the Lighthouse carnival and back to school event at Sherman Hills. Thanks to Chris for being our connection in this creative and beautiful ministry, and to Kim for coordinating the photo booth and youth team.
Posted by JP Bohanan at 5:27 PM No comments:

New Testament context of the sacrament is a communal meal in homes.
Corinthians eating without “recognizing the body”

1. Eating together binds us in a circle/covenant of responsibility and care
Practice: Give
Boy in Lesotho
Hoarding food
John Howard Yoder, “shared poverty”

2. Daily bread comes with an expiration date
Practice: Trust
Weighing our plates
Enough is enough (rather than “more” is enough)


John Howard Yoder, Body Politic
Posted by JP Bohanan at 4:39 AM No comments:

Posted by JP Bohanan at 8:50 AM No comments:

Posted by JP Bohanan at 1:32 PM No comments: 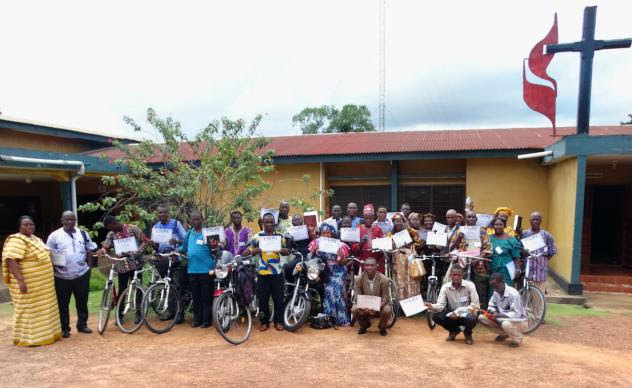 Photo by Phileas Jusu, UMNS
Clergy and lay leaders display their certificates and bikes after a Bikes and Bibles training session at the Child Rescue Center in Bo, southern Sierra Leone. Members of the Anglican Church, United Brethren in Christ and United Methodist Church took part in the training.
By Phileas JusuJuly 24, 2017 | BO, Sierra Leone (UMNS)
Since the Bikes & Bibles program began three years ago in Sierra Leone, churches have been planted in communities that previously were Muslim or practiced traditional African religions.
In Kortumahun, a new congregation of 70 members worship where there were previously no Christians. In Sembehun, a new congregation of 92 has grown out of a community that had only practiced traditional religion. Gbanahun, which was predominantly Muslim and had a few African traditionalists, now has a Christian congregation of 92. The New York Section of rural Bo City, which started with just 10 members, now has a congregation of 145, said the Rev. Francis Charley, Bo district superintendent.
Steven Senesie, circuit minister for the Mongere Circuit in Bo, received a motorbike from the Bikes & Bibles program in 2015 and said his experience has been great.
“I work in a very difficult terrain where mobility is a huge challenge,” he said. “The commercial motorbikes are so expensive that a pastor cannot afford paying on a regular basis, and pastors have to reach out to congregations in remote communities all the time.”
The rest of the story ...
Posted by JP Bohanan at 2:24 PM No comments:

To Mars and Beyond (Monday 2) 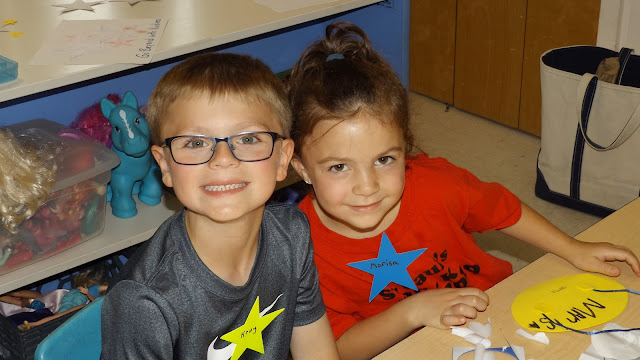