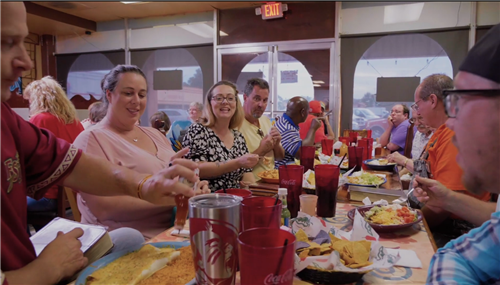 As he was growing up, Wildwood UMC Pastor Michael Beck came to a crossroads.
An alcoholic and addict, jailed for dealing drugs, “my life was in shambles,” Beck said. When his grandparents, who had adopted him as a child, took him to St. Mark’s United Methodist Church in Ocala, he saw the possibility for another kind of life.
“They were positive, loving people who gave me a family and community,” said Beck, who remembers the pastor mentoring him, helping him find the path to recovery, and telling him that he was destined to be a religious leader. “I cried out to Christ, and he came.”
Beck was brought to the church but knew, especially among people who were at risk or outside traditional society, that was increasingly rare.
“People aren’t coming to church anymore, but they want a church,” he said. “I knew I was going to have to go to them.”
His first posting as pastor was in the tiny town of Lochloosa, south of Gainesville. The church had a congregation of 12, so Beck’s blended family of eight children with his wife and co-pastor, Jill, doubled its size.
There, at the local diner, he started his first Fresh Expressions group, though he didn’t yet know to call it that. He just knew this was the place to connect with people.
“We asked what they needed and created a service for them, around their needs. It was its own church, and we connected to the existing church,” Beck said.
...
He built on the FE model that had been such a success in Lochloosa, creating a group for people in alcohol and drug recovery along with a gathering at a tattoo parlor.
“When we heard about FE, we realized this is what we’d been doing,” Beck said. “It gave us whole language process and the missing pieces to connect everything.”
Wildwood Associate Pastor Nicole Larrabee leads the tattoo parlor FE at Fat Kats Artistry, which began when they noticed many people in the recovery group had tattoos.
“It was like the spirit led to where it was going to be received,” Larrabee said.
To Brittany LeClair, who attends the group, it becomes more than a tattoo parlor.
“It’s God in the world,” she said. “We’re together, sharing communion, singing Amazing Grace.”
It has opened avenues that had previously not existed.
“It’s the opportunity to be with people who are never going to walk into our church on a Sunday morning,” Beck said. “We’ve seen incredible things – tattoo artists accepting Christ, taking communion for the first time, bringing us their prayer requests.
“All of the ingredients of church are here. We’re tethered to an existing congregation, and we’re studying scripture; people are talking about things they’re wrestling with and how the Lord is bringing them through. It’s a full expression of the church of Jesus.”
If a few Fresh Expressions are good, more is better.
Wildwood now has more than a dozen groups, including yoga therapy, Burritos and Bibles at Moe’s Southwest Grill, Church 3.1 exercise group, and Paws of Praise dog park....
The rest of the story...
Labels: community mission